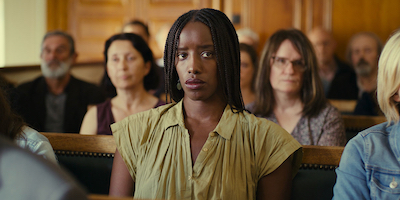 Fresh from winning a top prize and the Venice Film Festival, this is one extraordinary narrative debut by acclaimed documentarian Alice Diop.  Her doc roots are evident in the film as there are lots of actors speaking to the camera just as interviewees do, especially in the long takes of the court sessions.  The incidents are never shown on screen but unfolds in the words of the actors, and more effectively so.  A young novelist, Rama (Kayije Kagame), is working on a contemporary retelling of the ancient Medea myth.  In Greek mythology, Madea is a mother who murdered her children.   Pregnant herself and increasingly uneasy, Rama’s own family history, doubts, and fears about motherhood are steadily dislodged as the life story of the accused woman, Laurence Coly (Guslagie Malanda), is gradually revealed. From a stern upbringing in Senegal to gradual isolation from family and society on her arrival in Europe, Coly’s experiences expose the traumas of racism and emotional manipulation that can remain unspoken while insidiously and irrevocably corroding a person’s well-being.

Never has a film with so much dialogue been so exciting and compelling.  The courtroom drama played out by director Diop looks so much like a true crime drama.  SAINT OMER where the baby was drowned is west-northwest of Lille on the railway to Calais, and is located in the Artois province. The town is named after Saint Audomar, who brought Christianity to the area.

SAINT OMER has been awarded the Best International Feature by the Toronto Film Critics Association.