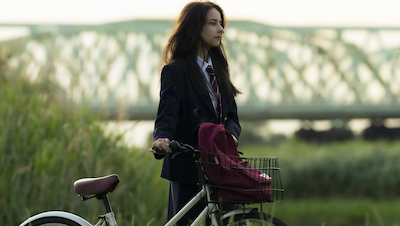 When the film opens, the audience sees Sarya (17), a Kurdish refugee girl in Japan.  She is speaking with her teacher in school who compliments her.  Her life seems to be looking up; her grades at school are good enough to pursue college, she's surrounded with good friends and her relationship with Sota (Okudaira Daiken), a Japanese boy working at the same grocery store as her, is becoming special. It is revealed at a family scene that her father is unaware that Sarya is working.  Sarya’s life turns upside down, however, when her family's refugee status is turned down, restricting her family from work and traveling across the city.  Her father is furious as he has scars on his knee to prove it.  ‘They burnt my house down’, he cries out at the immigration officer who just goes through the motions of his work.  Her father, who had continued to work to sustain a living, is later taken into custody for illegal employment. Sarya is now suddenly forced into a situation where she is responsible not only for her younger siblings but for her very existence.  This is at the midway point of the film.

Director Kawawada’s film (which is based on her novel and her experiences) is sincere and well-intentioned and sometimes feels too much so that the material appears manipulative.  Young actress Lina Arashi, however, a Middle-eastern model is totally winning and charming as the innocent Sarya who has adult issues to contend with.  She makes the movie.

MY SMALL LAND is the first film to be released by the newly founded  distribution company, Momo Films (https://momofilms.com) in Canada. Momo Films focuses solely on Japanese films, hopefully to release 2 - 4 films yearly.  It is one of the aims of this website to promote starting independent film distributors like Momo Films.  MY SMALL LAND is a worthy first release and its theme is similar to the struggles of the underdog and under-represented.  MY SMALL LAND was produced by Kore-eda Hirokazu's (Director of AFTER LIFE, SHOPLIFTERS and this year’s BROKER)  production company, BUN-BUKU.  MY SMALL LAND won a Special Mention of Amnesty International Film Award at the Berlin International Film Festival this February.

MY SMALL LAND screens in Toronto at the TIFF Bell Lightbox on November the 9th and the 16th.