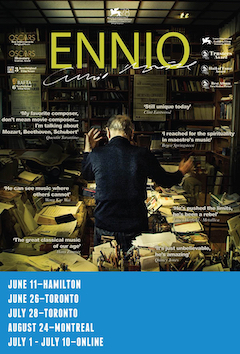 In ENNIO, Giuseppe Tornatore directs a nostalgic documentary of his film music composer for his first and most famous film CINEMA PARADISO.  Tornatore is the perfect director as his doc has the same feel, tone and atmosphere as his classic film.   Both films pay tribute to the cinema.  ENNIO also pays tribute to Ennio Morricone, one of the most, if not, most influential film composers of all time.  Everyone recognizes his composition of his iconic tune for Sergio Leone’s classic spaghetti western, THE GOOD, THE BAD AND THE UGLY.

The doc includes clips of his acceptance speech for his Honorary Oscar and the second, an unforgettable speech by Quentin Tarantino who received it on his behalf.  The doc also includes the biography of Morricone from his humble beginnings from a poor Italian family to his early career as a trumpet player, following his father’s footsteps to his study at the Conservatory to his first job as film music composer.

Director Francesco Costabile’s femminist drama about a young woman, Rosa trying t break free of mafia roots is a slow-paced yet absorbing little thriller/drama that befits from both its meticulous pacing and performance of Lina Siciliano as the lead character, Rosa.  The film opens with Rosa as a young girl when she just lost her mother, the segment ending with a touching image of her grandmother hugging and comforting the child.   Since then, Rosa has lived with her uncle and aunt in a remote town in Calabria. When her mother’s involvement with the mafia begins to catch up to her, Rosa is forced to face the consequences of her mother’s actions as she makes her own way in the world.  Rosa must decide how far she is willing to go to break out of the mafia while being drawn into its immense power and pull.  Rosa breaks the code of silence (the English title) to find out the truth of what is happening with her family in order to break free.  This is a case of the men forcing their women to face the consequences of their actions, in this case the local mafia, and then the women that affect their families when they have to take responsibility.  UNA FEMMINA shares the same theme as the recent A CHIARA also about a girl discovering and breaking rom her family’s mafia roots, but UNA FEMMINA is the better film. 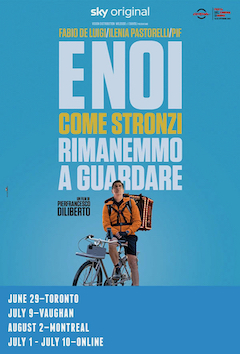 When technology lets you down, let go of technology.  The film’s protagonist unfortunately never lets go of technology even when fired for the algorithm that he wrote for the company - the same one that deemed hm redundant.   Arturo’s life goes into a downward spiral, but Arturo is determined to keep himself afloat.  He begins delivering food for FUUBER, a large service company that uses high tech.  To hold off the loneliness, Arturo turns to the hologram Stella. The two become quickly close, but what Arturo is not prepared for is when his free trial with Stella runs out. Forced to work even harder, Arturo discovers that there is a way to find love and freedom, even when a technological giant knows everything about you... as long as we do not just stand and watch like morons.  The film’s funniest segment is at the beginning with a musical rendering of a Nazi song and dance number but the humour the rest of the film never matches this.  Many of the jokes centre of Arturo’s clumsiness, which are not really funny despite the promising premise of the movie and his romance with the hologram is tolerable at best 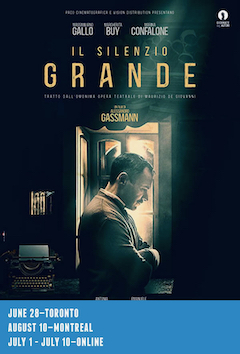 If the surname of the director sounds familiar, Alessandro is the son of famous Italian actor and director Vitorrio Gassman.  Alessandro follows the footsteps of his father as an actor and director.  His latest film, THE GRAND SILENCE is based on the play of the same name written by Maurizio De Giovanni.  This film is set in Villa Primic, once a luxurious home, now a creaky old mansion straight out of a ghost story.  Reluctantly put up for sale by Mrs. Rose Primic and the two heirs to the Primic's dilapidated fortune, Massimiliano and Adele, the only member of the family who is not happy with the decision is Valerio, the family patriarch. As the story unfolds, Valerio discovers he may never have really known his loved ones and, perhaps, not even himself. Slowly he begins to realize that living is not the same thing as being alive. Journey through 1960s Naples and watch as themes of family, the difficulty of change and the passing of time unfold; through emotional conflicts, silences that explode into a cacophony of words, laughter and sorrow, this film sheds light on one difficult truth: sometimes people talk but not everyone truly listens.  The film is a bit on the talky side and director Gassman could have modified the play a bit and added a bit more humour to spice up the incidents.  The film feels pretentious and stretches out too long. 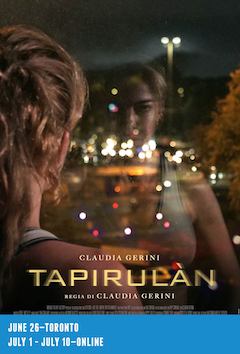 Tapirulàn marks Claudia Gerini’s directorial debut. This is the first time Gerini is both acting in and directing a film and her confidence shows - but in fact too much that her character sounds smug, cocky and pretentious.  Gerini plays a young woman, Emma who is always on her treadmill.  Even when not running on it, she sits on top of it.  Emma, tormented by her past, runs on her treadmill for hours to distract herself from the everyday reminders of her trauma.  She  had apparently attempted suicide,  Ironically, Emma works in online counselling where she listens to other people's troubles, offers advice, and helps them process their problems and unresolved issues, with the hopes to improve their lives.  The trouble is that she refuses to get off her treadmill when she is doing her online counselling, she then obviously getting complaints from her clients.  When her sister unexpectedly shows up after 25 years, Emma is faced with a challenging request that she is afraid she cannot refuse.  The film doesn’t improve.  THE TREADMILL has a boring premise that runs out of steam.  The audience can similarly complain that the filmmaker should get off her treadmill and make a proper movie.