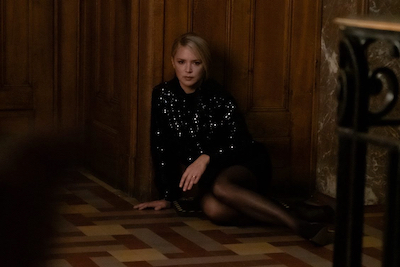 The film’s trailer makes the film look like a thriller but the film is more a drama with some suspense.  So, it is easy to be fooled just as the film’s main female protagonist’s men are fooled by her.  The woman goes by two different names, and leads two separate lives juggling both rather well till trouble rears its head in paradise.

The woman (Virginie Efira) leads a double life: two lovers, two sons in France as Judith Fauvet and one daughter in Switzerland as Margot.   In France, she is married to orchestra conductor Melvil Fauvet (Bruno Salomone) while in Switzerland,  her lover is Abdel (Quim Gutierrez).  Entangled in secrets and lies, her lives begin to shatter.

The film begins impressively with a lady (Mona Walraven), well dressed though her hair a bit dishevelled entering the dress department of a departmental store.  She is shown dresses and takes a few to a fitting room, before she faints and knocks her head on the wall.  As she is led out the department by a vendeuse (Anne Depla), she is heard but not seen.  She has evidently fallen.  “There is blood everywhere.  She does not have a pulse.”  These are the words heard on the soundtrack.  What is impressive about this opening, is not what takes place, though still interesting, but the posh way in which the entire segment is done in real-time in one take as the camera moves around the store fluidly.  It must have been a tough scene to be done so masterfully, and must have taken several takes to finalize with the perfect one long final take.

The film will arouse the curiosity of the audience.  What this scene has to do with the rest of the story is only revealed at the end.  The lady at the beginning, played by Walraven, looks a bit like the main protagonist, and one might get confused whether these two are the same person.  And the reason the film is called MADELEINE COLLINS as the two women in the film are called Judith and Margot is revealed finally at the film’s end.

In the film, director Barraud is as manipulative as the lead character.  Madeleine soft talks to her men and knows how to pretend to be angry to distract them.

In the past, it was the men who kept a wife and mistresses on the side.  This film portrays the opposite where the men function as the victims and the female as the aggressor.  Judith/Margot here, juggles two lives, two mens and two sets of children.  It is too convenient to have her as the intelligent one, still loving both men and playing them for fools.  One variation is that one of her men knows about the other but not the second one.  But it is a tale that as predictability goes, one can tell it is  about how the setup has worked in the past, and how it can come crumbling down.  And how the female aggressor will deal with the catastrophe.

MADELEINE is a neat little menage-a-trois, fresh in concept with a strong female slant to the story for a change.  The film has already opened in Quebec in April and opens in Toronto on June the 10th.