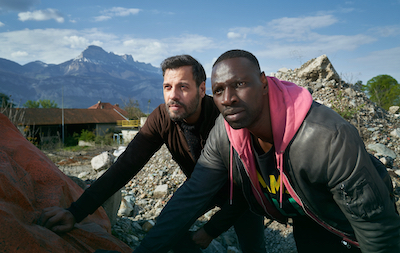 English speaking cinema goers have their pro Idris Elba, A Brit starring in both English hits such as THE HARDER THEY FALL, THE SUICIDE SQUAD and CONCRETE COWBOY.  One the European side, French cinema goes have OMAR SY who rose to fame with the French comedy hit UNTOUCHABLE (remade into a Hollywood film), SIMPLY BALCK, POLICE while also crossing the Atlantic starring as Hemall in the Marvel films AVENGERS and THOR as well as the JURASSIC WORLD films.  His test film, on Netflix shows Sy in top form, both in action and comedy, a French outing despite its English title.  Sy is the main one that makes the action comedy work.  THE TAKEDOWN is directed by Louis Leterrier, no stranger to action films THE INCREDIBLE HULK, CLASH OF THE TITANS AND FAST X.  So, expect lots of action and comedy in THE TAKEDOWN.  One would not be disappointed.  As a bonus, the film displays the gorgeous French country from Bordeaux to the French Alps.

The film begins with what appears to be a takedown.  Cop Ousmane (Sy) and his partner break into a FIGHT CLUB type of match in order to arrest a suspect.  The next thing has Ousmanae fighting the star attraction.  The audience is then introduced to another cop, a white cop, Francois (Laurent Lafitte) who has a way with women, but has a problem with his ego.  The two are forced to do A takedown.

Ousmane Diakité (Omar Sy) and François Monge (Laurent Lafitte) are two cops with very different styles, backgrounds and careers. Many years ago they worked together but life took them apart. The unlikely pair is reunited once again for a new investigation that takes them all the way up to the French Alps. What seemed to be a simple drug deal turns out to be a high scale criminal case wrapped in danger and unexpected comedy.

In terms of action comedy, the fights and story (the iteration between two cops with differences) are nothing new.  But there are sufficient surprises that make the film stand out.  For one, the cinematography showing the French countryside is a sight for sore eyes.  The production sets such as the arena in the film’s opening scene are also impressive.  The film is also very funny with director Leterrier taking every opportunity to inject laughs into his feature.  When the police store the arena, they accidentally catch someone at the trash thinking that it is the trash police making sure that he puts the recyclables where they belong.  “I never knew they were so serious,” he comments.  The action set piece with a  youth on a motorbike being shown and his bike going off the bridge with his body splitting into two after hitting high volt wires before crashing down not the train below needs to be seen to be believed.  This leaves the bay in two halves, each for each cop.  Other memorable ones include a chase across the lanes of a  bowling alley, a dodgem (bumper car) chase in the aisles of a supermarket.

THE TAKEDOWN might not be the best film of the year nor will it win choice awards, but it is what it is supposed to be, a fast paced action comedy that is both entertaining and a solid time-waster.  In one scene the cops say “C’es nous, La Loi.”  (It’s Us, the law!).  In the 2019 police classic by Lady Ly LES MISERABLES - the white racist cop similarly tells a suspect: “C’est Moi, la loi!”  (It’s me, the law!)   Ly’s LES MISERABLE was one of the best films of the year, also tackling the problem of criminal youth in the Paris suburbs, aiming for the higher goal of making a social statement.  THE TAKEDOWN does however, quite effectively touch on the racist issue. The film is available for streaming on Netflix.  Filmed fully in French.