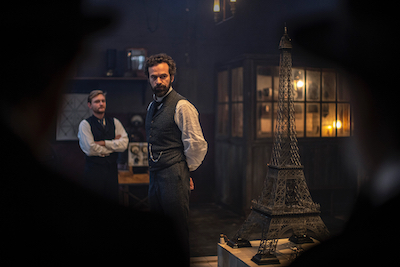 As the title implies, EIFFEL is about the construction of  the Eiffel Tower (le tour Eiffel), the monumental structure in the heart of Paris that attracts countless tourists daily, all year round.  It purports to tell of the story of its construction in the 1890’s but adds up a towering mess of a period historical piece.

It is beyond doubt that EIFFEL, directed by first time director Martin Bourboulon is a handsomely mounted period piece.  Everything looks image perfect from the costumes, props, architecture, vehicles, horse carriages and hazy atmosphere.  Unfortunately, the story of Eiffel played by Romain Duris is rather a personal piece of his romance with Adrienne Bourges (Emma Mackey) overshadowing the building of the Eiffel Tower.  There is a scene at the end of the movie when the opening of the tower is celebrated by Gustave Eiffel himself with political officials.  The camera pans to a glance made by Emma as she looks as Gustave with the impression that she is the one totally responsible for the Eiffel Tower and without her, it would not have been built.  In a way, as the film shows, she has influence over him as he is totally enamoured by her, and that she has convinced her husband to go easy on Gustave so that he can build his Masterpiece.   But she does not deserve this much credit.

The construction and design of such a towering landmark is understandably an extremely difficult task.  The film shows one disaster during its construction with flooding occurring and another with workers not getting paid enough.  Yet these issues are never properly addressed.  Despite the construction problems, the audience soon sees the completed tower as if the problems had not occurred.  The workers also go straight back to work after Gustave’s ‘silly’ talk of going back to work with more pay.  In one segment Gustave changes all the bolts to rivets  saying that this way, the construction cannot be changed.  True, but not many of the audience would know the difference between a rivet and a bolt.  The film assumes one knows the difference and fails to explain the difference that a rivet is soldered and fixed and unlike a bolt cannot be ‘unbolted’ by unscrewing it.   Gustave is also seen with a full beard in one scene and almost clean shaven in the next.  This discontinuity occurs many times and is disorienting.  Are there two different time-lines or is continuity just ignored?  If it is the former, the non-chronological order of the segments is not made clear.  Another problem is the age difference of the actors playing the lovers.  In real life Duris is 22 years older than Mackey and the  difference shows in the film.  His lover looks as young as Armande Boulanger, the actress playing Gustave’s daughter, Clair.

EIFFEL lacks the audience anticipation factor.  There is nothing interesting and the incidents just unfold one after another.  The political, financial and architectural problems of building the tower are largely ignored and assumed solved with little difficulty.  The film gives the false impression that a single man influenced by his lover can construct the Eiffel Tower all by himself without any team of designers, engineers and skilled labour.  And all the problems can be solved without difficulty for the reason that the film demands a happy Hollywood ending.

It is a pity that EIFEL ends up quite the dud of a movie as the film looks stunning production-wise, just as the Eiffel Tower stands in Paris to this day.