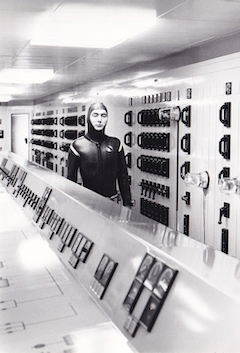 THE UNKNOWN MAN OF SHANDIGOR is a largely unknown black  and white Swiss spy thriller that made cinematic history when it opened.  I have not heard of the supposedly long-Unseen 60s Cold War Spy Thriller that stars Marie-France Boyer, Ben Carruthers, Jacques Dufilho, Daniel Emilfork, and Famed Singer-Songwriter Serge Gainsbourg.  But seeing its re-release, the film has whetted my appetite and it is a strange spy film, as strange as say Joseph Losey’s MODESTY BLAISE that came out around the same time.

The story is simple and typical of the spy genre of films that polluted theatre screens in the 60’s and 70’s.  These days, it is the Marvel action super-heroes that have displayed the super spies like James Bond, OSS 117, Mata Hari, Matt Helm and Flint, just to name a few. In eta age of nuclear bombs, a scientist has invented a device called the cancelor, as it cancels or stops the atom bomb.  Just as important as the atom bomb is the cancelor.  Whoever gets hold of the cancelor device can control the world - typical of spy films.  The inventor is in a wheelchair.  A host of spies, all bald and clad in suits and wearing dark glasses are given the task of stealing the device.

The film bears resemblance to many classics.  It feels like a Godard movie, for the one reason that the dialogue is in Swiss French and the other is that it has the look and feel of Godard’s futuristic film ALPHAVILLE.  It also looks like Stanley Kubrick’s DR. STRANGELOVE as the inventors in that film, played by Peter Sellers is also in a wheelchair and bth films dealt with the atom bomb.  The building that housed the War Room in STRANGELOVE looks similar to the residence of the inventor of the cancelor.  In addition, both films are in black and white.

Director Roy’s humour is so dead pan that one has to really observe the humour to see its hilarity.  One is the segment of the training of the bald spies.  They are instructed that to be effective they must don different disguises like being a Chinese or a Black man.  The film features a Chinese later on, which is funny because that spy might have realized the same lesson.  This spy successfully steals the reel containing information on the cancelor.  The inventors assistant is an albino, giving the film a more weird feel, who is murdered in a cubicle in beach and dying in style.  Roy’s film is incredibly stylish with super looking production design, wardrobe and props.

The legendary French pop singer plays one of the spies eager to get their hands on the cancelor.  He gets to groom his deranged jazz-lounge song in a funeral parlour, which makes it one of the best and weirdest set prices in the movie.

This spy film might not be for the current film audience but for those who grew up with the  60’s and 70’s spy film, they will be in for a nostalgic trip down memory lane.

The 4K restored version of the movie is out on VOD in the US + Canada Tuesday March 1, 2022