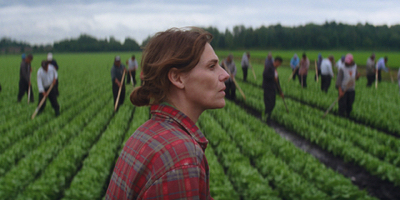 DRUNKEN BIRDS, a co-production of Canada and Mexico, filmed in three languages, French, Spanish and English covers a variety of issues while being set in the real world of insurmountable problems.  Director Grbvic’s film is also artistically stunning and though quite a film experience, it is a little too ambitious for its own good.

The film begins with an impressive car chase scene in which a burning car is driven on an open road.  This is definitely a difficult to almost impossible scene to shoot, and one must admire Ivres’ dedication to his craft.  The person being pursued is Willy (Jorge Antonio Guerrero) chased by a man with a flowery shirt, who later complains that after beating up Willy, that Willy got blood on his favourite shirt.  The camera closes up on a pendant that Willy holds while on the dirt ground.  The film is Willy’s story as he escapes Mexico and the trouble that follows.  Willy is in love with his drug cartel boss’ wife, Marlena (Yoshira Escárrega), the scene again re-visited at the end of the film.

Willy and Marlena decide to disappear for fear of the boss.  They decide not to know each other’s whereabouts for the sake of safety.  All Willy knows is that Marlena is somewhere in Montreal.  In the meanwhile, Willy travels to Canada and gets a low paying job as a farming migrant worker.  “This is like the army,” remakes one of the workers during orientation.  Life gets harder and more complicated.

The film weaves through the intersection of love, desperation, and the harsh realities of globalized labour.    The labour here is not restricted to Mexicans but there are also Chinese and Sikhs that are also exploited.  Other issues include family dysfunction, growing-up, the sex trade in Montreal and a little romance.  Ivres covers a lot of material in his film that moves at a pace occasionally too leisurely for its topics.

Though the story is primarily about Willy, Willy’s life again gets complicated when he nurses his  farm owner’s daughter back to health after she is beaten up by hr pimp in the sex trade.  She remains silent for fear of being exposed while Willy is mistaken as the man who beat her up and has to flee the farm.  If one wonders the reason the daughter betrays Willy who has helped her, it is easy to see that she wants to protect herself at the expense of a stranger.  The topic of betrayal could have been treated with greater detail.

Cinematographer Sara Mishara’s camera captures both the beauty of the exteriors (the farm, the ‘drunken’ birds flying in the sky, the escape through the field at night) as well as the interiors (the cramped living quarters of the farm workers), and of course the stunning opening scene.

The open ending of DRUNKEN BIRDS might look like a copout and many would expect a more satisfactory ending given the amount of time devoted into each of the different characters brides Willy.

LES OISEAUX IVRES (DRUNKEN BIRDS) opens this week at the TIFF Bell Lightbox.  Check out the awesome new program of films opening soon at the Lightbox.