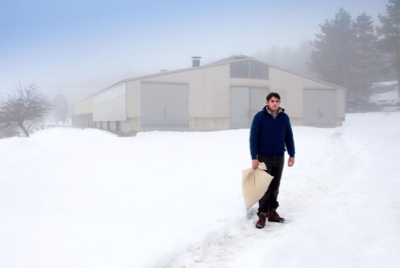 French German director Dominik Moll is a director that is one to watch.  He made a mark in the international film scene with 2000’s HARRY, UN AMI QUI VOUS VEUT DU BIEN (HARRY, HE’S HERE TO HELP) which won him the Cesar for Best Director.  5 years later in 2005, his LEMMING was chosen to open Cannes.   Both are excellent films having the theme of sophisticated murder (or at least an accidental death) reminiscent of the best of Chabrol.  LEMMING never made a release in North America.  Fortunately, Moll’s latest SELUES LES BETES, finally gets a release here though late because of the Pandemic.  SEULES LES BETES is again definite proof that Moll is a top-notch director whose films never fail to entertain and fascinate.

SEULES LES BETES which translates more accurately to “Only the Beasts” (as the word in French for animals is animaux) is based on Colin Niel’s 2018 French novel “Seules les bêtes”.  It is a fascinating tale of murder and coincidences and the human’s desire for love.

From the very first 15 minutes when the film opens, director Moll grabs his audience’s attention and never lets go.  The audience sees a poor teen riding his bike with a goat on piggy-back as he steers his bike towards the local village in the Ivory Coast, Africa.   The next scene shifts to the cold winter snow and ice of the French Alps in southern  France.  One immediately wonders what these two scenes, so different from each other and involving two places so far away from each other, have to do with each other.  Plenty!  As Moll shows,  through his expert storytelling, coincidences affect the lives of his 5 characters.  The common theme in the stories of the five is the insatiable desire to find the perfect love, and at all costs.  Moll tells his story, intercutting them and in a non-chronological order, enhancing the film’s mystery in the process.

Alice (Laure Calamy) is a married social/medical worker who makes her rounds in the country that includes a mentally affected patient, Joseph (Damien Bonnard) who she is having an affair with.  Her husband, Michel (Denis Ménochet) is desperately searching for love over the internet with a girl who does not exist but whose photo is put up by the internet scammer in Africa in order to entice him to send money over.  The photo used actually belongs to Marion (Nadia Tereszkiewicz), a waitress.  Director Moll moves his story to the real Marion, who falls head over heels in love with Evelyne (Valeria Bruni Tedeschi) who is uninterested in a relationship.  Evelyne is the woman who is missing and is the common thread that ties all the stories together.  The less said about the plot the better as the entertainment depends largely on the twists and turns of the story.

One might complain about the extreme coincidences that occur in the story.  But this fact only serves to establish director Moll’s gift in making the film’s story believable and of course frightfully entertaining.

ONLY THE ANIMALS opens November 5 in Toronto (Carlton) and a week later in Vancouver and Montreal.