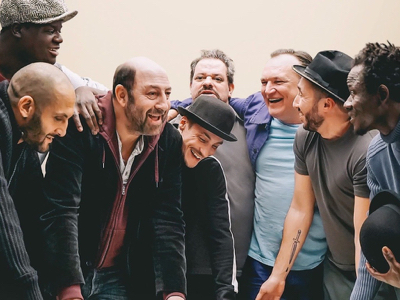 As unlikely as the film’s series of events could have taken place in real life, it did, and the film clearly touts the fact at the start that the film is based untrue events (apres one historic vraie).

Etienne (Kad Merad), an often out of work but endearing actor, runs a theatre workshop in a prison, where he brings  together an unlikely troupe of prisoners to stage Samuel Beckett’s famous play Waiting for Godot (En Attendant Godot).  When he is allowed to take the colourful band of convicts on a tour outside of prison, Etienne finally has the chance to thrive.  Each date is a new success and a unique relationship grows between this ad hoc group of  actors and their director.  But soon comes the final performance in Paris. The question is whether their last night together will be the biggest hit of them all?

At first glance, the story might seem intriguing with convicts doing Beckett.  But it could be a flop and a bore.  But director Courcol is able to observe the best and occasionally faults of human behaviour and human nature to craft his otherwise observational piece - of both the convicts and Etienne.

Etienne initially is carried away with the notion of convicts performing in a Paris theatre.  Etienne goes all out to get approval from the prison authorities and also to round up a group of 5 actors, out of 500 or so.  The five are extremely lucky, they are told, as they have been selected out of 500 and they get to leave prison and perform as if they were free.  But mostly, they get to experience the euphoria of performing on stage.  Many of the convicts arrange for their loved ones to come to watch them perform, including Etienne, who invites his estranged daughter to attend.  She does not show up, reciprocating her father’s actions as he was not always there for her.  When Etienne rebukes her for not showing up at the theatre, she retorts; “You never even asked once how I did in my exams.”  Actor Merhad (BIENVENUE  CHEZ LE CH’TIS and César Award Winner for DON’T WORRY, I’M FINE) display both the enthusiasm and frustration of working in a prison theatre.

Director Courcol humanizes the story.  He relies on how the emotions of the prisoners are similar to the theme of the play.  In EN ATTENDANT GODOT, the characters in the absurdist play are always waiting for Godot who never shows up.  The prisoners themselves share the same fate.  They are always waiting - waiting for meals, waiting to be put back to their cells, waiting for visiting time and waiting to finally get out of prison.  So they can relate, as Etienne observes.  It is also marvellous to see one of them, who has never read and has a bit of a speech impediment, recite the wondrous lines of Beckett.

The only trouble with the film is director Courcol trying too hard and it shows.  The last portion where Etienne takes to the stage to praise his actors is over the top, with the entire audience approving and giving him a standing ovation.  Too eager to please, Courcol’s timely observational piece on corrections ends up a minor feel-good movie.

The temptation of the convicts to make an escape is obviously there, as it is so easy with so few guards and with the play going on.  Not to provide any spoilers, the problem is not overlooked in the film.