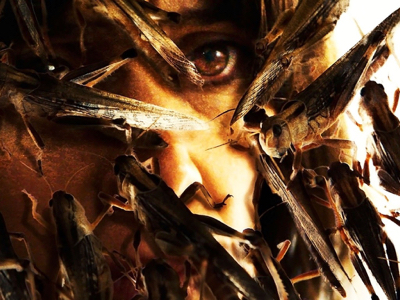 The intentional Netflix movie premiering this week is another French winner - THE SWARM, a well executed (in all departments) horror drama with a hint of environmental commentary.

The story/plot is simple enough, so best not to expect any twists in the storyline.  The film ends where it is supposed to - a cautionary tale of greed and tragedy.

The film was awarded the Cannes’ 2020 Critics’ Week label, and has won critical acclaim in various film festivals around the world.  Because of its cinematography, the film is best viewed on the big screen.

The film follows a single mother, Virginie (Suliane Brahim, de la Comédie Française) who, with two children. teenager Laura (Marie Narbonne) and Gaston ((Raphaël Romand) slog out a meagre existence on their rural farm in France after their father has died (reason not detailed except that it has something to do with goats).  Virginie gets into the business of protein obtained by cultivating locusts, disgusting creatures that director Philippot shows, cannibalizing themselves in a close up scene where the audience gets to witness them eating each other.  These locusts also develop an appetite for blood and this is where the problem of greed arises.  Virginie discovers the immense growth (speed and health) of these insects after they devour blood.   She feeds them blood from herself, and other various sources till they multiply at a rate impossible to control.  At the same time, Virginie begins to lose it.  No need to disclose the ending, as one can guess what will occur given the circumstances.

The family drama is heightened with two relationships - one between Virginie and her daughter Laura who is growing up quickly and difficult to control, given the mother’s immense work and being single at the same time.  The other is the budding romance between her and a sympathetic Arab, Karim (Sofiane Khammes) who lends her a hand with finances.

The drama and the horror element are effectively blended together so that THE SWARM becomes that rare horror film where the audience cares for the characters, displayed warts and all.   The film at times feels like a horror JEAN DE FLORETTE flick thing JEAN DE FLORETTE meets THE FLY.  But what makes the film really tick are the special effects by Antoine Moulineau.   Besides the sights of the huge swarm of locusts in the sky coming down on human beings, on a warm feasting on the blood of a human victim, it is the closeups of these insects with their ugly heads, hairy legs and compound eye that give the film a really creepy feel, making one's skin crawl.

Director Philippot also comments on the unfriendly male environment faced by the family.  Laura has trouble with her male friends at school..  She is made fun of because of her mother’s business.  Virginie is also given the run around with low prices aid for her locust products.  The only exception is the kind Karim who also admits to her that he is treated as an outsider in the area.

THE SWARM is a compulsive watch from start to end with lots of drama and special horror effects.  What more can one ask from Netflix?