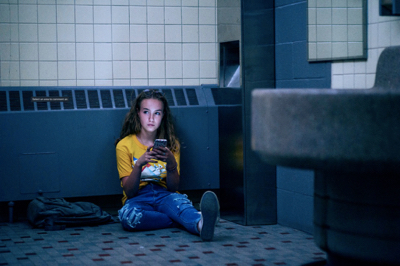 LES NOTRES opens with the 5-year term mayor, Jean-Marc Ricard of the Quebec town Sainte-Adeline giving a speech during a ceremony for the opening of a local park, the Saint Germaine.  He is well respected and has a photo taken of is family, as he claims.  It does no take a genius to guess that something is afoot, and perhaps this mayor is up to no good.  Director Leblanc plays her cards well s her somewhat brilliant small-town drama unfolds.  This opening scene, if one examines carefully after watching the film, is one that takes place after the story not before.

The film is set in the tight-knit community of Sainte-Adeline, Quebec, where everyone knows everyone else and gossip moves around really fast and is deadly.  Magalie (Émilie Bierre) appears as a normal suburban high school sophomore surrounded by friends.  Magalie collapses one day in her dance class and a doctor’s examination reveals his popular teenage girl is harbouring a shocking secret: she’s pregnant. Her mother is informed and word spreads.  When Magalie refuses to identify the father, suspicions among the townsfolk come to a boiling point and the layers of a carefully maintained social varnish eventually crack.  As said, it does not take  genius to guess that the father is the mayor, the fact revealed after the film’s 30-minute mark.  Mr. Ricard is clearly the bad guy in the story, preying sexually on under-aged girls and clearly deserving of no mercy.  Director Leblanc makes that clear and the audience despises this evil sorry excuse of a human being from the first sight of the pudgy man.

The story is seen from two points of view - those of Magalie and of her mother.  Director Leblanc dishes out the details, without any judgement with the audience being sympathetic to both sides.  When they argue, one could take either side, as both have the right to feel angry and unappreciated.

There are many moving scenes and these are what makes the movie such a compelling watch.  One occurs when mother an daughter arrive home after the mother discovers the pregnancy.  The babysitter of the little brother remarks: “Your son was very well behaved.”

Or the exchange of words between the social worker, Patrice and the mother: “I am looking out for her best interest.”  Her retort: “I have been doing that for the past 13 years.”  Or the mother to daughter when first told of the pregnancy:”I don’t understand.”  Daughter’s reply: “I am sorry.”

The emotions run wild.  Both  mother and daughter do not know how to deal with the situation.  One moment the mother tells the daughter that she loves her and the next she is screaming at her in order to find out who the father is.  The 13-year old has mixed feelings, too young to realize that the father has no intention of loving her or keeping the baby, while she is doting on him.  All these questions are left to the climax of the film, which I can only reveal as a very powerful one.

The small yet brilliant LES NOTRES gets my vote for Best Canadian film of the year!