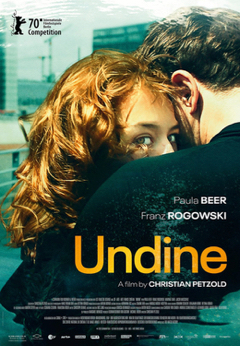 Undines are a category of elemental beings associated with water, stemming from the alchemical writings of Paracelsus.  Later writers developed the undine into a water nymph in its own right, and it continues to live in modern literature and art through such adaptations as Danish Hans Christian Andersen's "The Little Mermaid" and the Undine of Friedrich de la Motte Fouqué.

Director Petzold plays UNDINE with a constant air of mystery.  He keeps the audience guessing as to what is really going on - including the story’s mythical element, which is not disclosed fully until the very end.  To this effect, the film has credibility and succeeds as a mythical love story.  The film opens with what is a break up between Undine (Paula Bee) and her current boyfriend, Johannes.  Petzold also keeps it vague whether the two are just boyfriend or a married couple.  One assumes the former as it is hinted that they are not living together.  “We have to meet,” is one of their dialogue lines.  When Undine threatens Johannes, “If you leave me, I will kill you.” It is unclear at this point whether she really means it or whether these are the words of a somewhat psycho and desperate rejected lover.  Petzold’s film moves at a slow snail’s pace but this is not to say it is not without its rewards,  The answer to the question is revealed to the audience half way through the film, Hitchcockian-style.

Whether UNDINE is a tragedy or not is left to the viewer to decide (not to reveal any more of the film’s plot).  But UNDINE is a terrific romantic drama, similar to, say, Jacques Demy’s LES PARAPLUIES DE CHERBOURG, another incredibly romantic film about mis-matched lovers.

The metaphor of Berlin’s new architecture clearly forms the metaphor of the love story, which is a bit beaten to death by Petzold.

Director Petzold’s characters bear similarities with almost very person in that everyone wants to be happy or live happily ever after, as in fairy tales.  Undine wants to be in love and to be loved forever.  The obstacle of her ‘curse’ on having to give up her human life is a tragedy that affects not only herself but the others she encounters.  So is the real life of many where real unfortunate events prevent happiness.

The film’s shifting of focus from Undine, the protagonist to Christophe in the later part of the film, is a risky play works well in the film’s favour, just as Undine’s lover shifts from one lover to the next.  The use of The Bee Gees hit dog “Staying Alive” is a bit tacky considering the serious theme of the film.  The soundtrack, however, has a steady stream of Bach.

UNDINE is not the first film paying homage to Andersen’s THE LITTLE MERMAID.  Japanese animator Hayao Mizayaki did likewise in his successful animated feature PONYO.  This proves the universal appeal of love stories that overcome great obstacles in the name of love.

Filmed in German, a German-French co-production.