Film Review: The Mercy of the Jungle 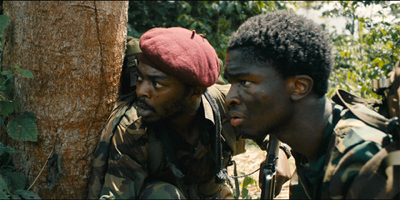 THE MERCY OF THE JUNGLE premiered at the Toronto International Film Festival back in 2018 but now gets its North American premiere through Film Movement Plus.  (See below).  It is a well-made film from Rwandan director, Joël Karekezi (his second feature) covering many key and current world (the central Africa conflict between the Congolese and fighter rebels) as well as the personal issues of its two main characters.

The film follows two soldiers accidentally left behind by their comrades during the Second Congo War.  One is a seasoned war veteran, a sergeant, Xavier (Marc Zinga) who has lost both his dignity and faith in mankind.  The other is a young Faustin (Stephane Bak) who is a peasant boy, suddenly finding himself stuck in the midst of a bloody war.  Xavier’s wife is dead while Faustin’s (wife) is pregnant.  It is a good concept and the entire film sees the two bonding, thought reluctantly, in order to survive.  Both are put in the hands of the war, or fate if one wants to look at the bigger picture.  The film’s most moving scene has the two sharing a Marie biscuit.

The two have to find the troops while staying off the road, as their enemies will be ready to slaughter them on the spot.  They are at the mercy of the jungle, but not without the jungle’s own threats.  Credit goes to cinematographer Joachim Philippe and director Karekezi for an authentic creation of the jungle atmosphere, complete with both wonder and dangers.  The shots of sunlight shining through the overhead trees are reminiscent of Akira Kurosawa’s  signature scenes in his Samurai epics.  The two face dangerous animals from the sound of trumpeting elephants and a huge ape in the background.  They have to deal with the intense heat, the sergeant coming down with a high fever and hallucinations, while being thirsty yet unable to drink the poisoned water found in some streams.  At one point, the sergeant drinks from Faustin’s water bottle only to spit out what was Faustin’s urine, which Fasutin was drinking to survive.  At the same time, the stunning sights like the natural waterfall and clear streams are also on display in the film.  The two are also forced to fend for themselves.  Fasutin’s boar trap manages to get them a rabbit for a meal.

As the film draws to its climax and conclusion, Faustin’s coming-of-age story is complete as the audience of Karekezi’s film learn more about the life of two solitary human beings who are not as fortunate as them, living in a cruel and unforgiving world.

How to view this film:

The film premieres from FILM MOVEMENT PLUS. Check the website: filmmovementplus.com.