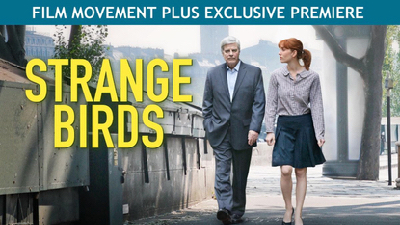 STRANGE BIRDS is the second feature film from filmmaker Girard (BELLEVILLE TOKYO) which world-premiered in the Berlinale’s Forum, who finally reaches North America on the SVOD Platform on May the 21st.

STRANGE BIRDS is a quirky, absurdist tale of two very different people who forge an unlikely relationship.  27-year-old Mavie (Lolita Chammah, AT ETERNITY’s GATE) -- clumsy, beautiful and full of doubts and looking for her path in life, has just moved to Paris from the provinces.   She dreams of a future as a writer, but is plagued by doubt and uncertainty.  She has an apartment which is really noisy from the sound of her flat-mate having sex at all hours of the da and night.  She seeks an alternative living accommodation and in the process meets 76-year-old misanthrope Georges (Jean Sorel) who runs a bookshop in Paris.  She helps to and gets free lodging.  George is a secretive and bitter person who sees to have some secret life he had left behind.   Georges is cynical and no longer expects much from life, while Mavie is still brimming with expectation.  Yet something magical happens between them, until Georges’ dark secret suddenly catches up with him – and Mavie is caught up in something very different.

This is a low budget little feature with not much going on.  Yet, it is a charming sophomore effort from director Girard who in her film, shares the beauty of life from her point of view.  She is clearly against nuclear plants as nuclear protests are observed throughout her film.  When Mavie walks around Paris, she sees dead birds fall dead in front of her  The mystery is revealed to to be the result of the birds being poisoned from eating waste  at a nearly dump, where nuclear waste is discarded.  Mavie is charmed by Paris and director Girard paints a quieter and more charming view of  France’s capital.  The sights of the street on a slope, the insides of little cafes and the tree-lined avenues all contribute to the film’s atmosphere.  But the centre of the film is story of the strange relationship between the 27 years old and the 76 year-old.  Their ’love’ relationship is described by lines they write to each other.  They talk about their imaginary love affair.  There is no kissing or frolicking between the two.  But they talk about a love that could happen if there had been no age difference.  They also talk about children that they could have.  Despite them never seen even touching each other, jealousy prevails,  When Georges sees Mavie with a younger man, he leaves and never returns.

It is wonderful to see veteran actor Jean Sorel in films again.  Sorel was simply one of the most gorgeous actors of his time, becoming noticed after BELLE DE OUR with Catherine Deneuve.  Much older in this film, one can still see his charming personality.  Virginie Ledoyen has a small supporting role.

Director Girard includes a film clip of Satyajit Ray’s masterpiece  CHARULATA about a love relationship between two people who share their love for literature, reflecting Georges and Mavie’s work together in George’s bookshop.

STRANGE BIRDS is an absurdist yet charming romantic drama about a ‘could be’ relationship between two highly different individuals.