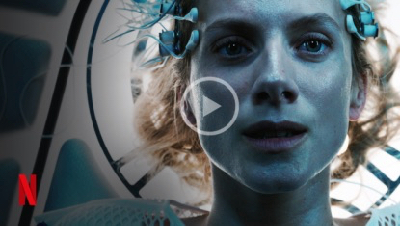 French horror helmer alexander Aja has made quite a name for himself in horror movies with his brand of exquisite colourful bloody horror.  His most famous works include THE HILLS HAVE EYES and HAUTE TENSION.  In his new horror outing, OXYGEN, a Netflix original film, he is given a bigger budget with a sci-fi premise.

A woman wakes up in a cryogenics pod.  She has apparently not remembered anything of her past especially not how she got there.  She breaks out of his mucky suit and tries to escape what she thinks has been forcible confinement or even a kidnapping.  The thing is that the oxygen level is low - and hence the title of the movie.  At one point in the movie, the lab computer MILO announces: Oxygen is at a level of 29%, Probability of Survival is zero.  The suspense is set high.  The woman, later disclosed to be Elizabeth Hansen (Mélanie Laurent) has to figure out a way to escape before the oxygen levels reaches zero.

Director Aja is limited in having to make a large portion of the film about one woman in a confined space.  He brings the audience out into the open with a few beautifully shot flashback scenes when Elizabeth reminisces the past, trying to recall her life with her husband.  Aja’s limitations can be observed in the middle fo the film when it starts to lag, because of lack of material.

The special effects are nothing too fancy but sufficiently convincing for the audience to believe the setting of the film.  Cyrogenics is the production and behaviour of materials at extremely low temperatures, which has nothing to do with the film though Elizabeth is supposedly woken up in a cryogenics laboratory.

To Aja’s credit, he has included a number of appropriately scary images - a few of these psychologically horrific.  The first is the image of a white mouse in a maze that appears to be going on forever.  If the mouse makes it around one corner, it will encounter and another and another and another - the camera pulling back to reveal an initiate number of possibilities in the maze.  The sight of a sharp needle especially one attached from a syringe is a sight that will make anyone cringe.  Aja has Elizabeth wrestle the arm of a machine programmed to inject with a needle into her eye.  White rats dying and a grey blob mucky substance include other scary images that Aja uses.

Netflix has asked reviewers not to reveal the discoveries Mélanie Laurent’s character makes about herself, aside from her name nor the location of the action beside that it taking place in a cryogenic unit - two solid twists in the plot.
Director Aja’s hefty aims of a sci-fi horror sinks under its lofty goals. The shift from a claustrophobic entrapment thriller to a sci-fi thriller, the unsatisfying film also suffers from a tacked on happy ending.

OXYGEN is a Netflix original and as all Netflix films can be viewed in different languages.  As OXYEGN is filmed originally in French, it is best viewed in French with English subtitles, if need be.  OXYGEN is available ob Netflix May the 12th.