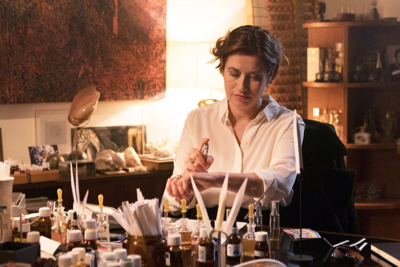 Emmanuelle Devos (my favourite French actress) plays a nose in the latest French comedy LES PARFUMS.  She admits the fact to her chauffeur in the film when asked what she does for a living.  “Je suit un nez” comes her reply.  As odd as it might seem in English, the term nose is a common term in French.  Ir essentially means ‘perfumer’ in English.

LES PARFUMS is a charming comedy about two people who are as different as they have similarities.  The two are the nose, Anne Walberg and her reluctant driver, Guillaume (Gregory Montel).

Anne Walberg is a fallen diva.   Devos plays her perfectly to the ’t’.  She seems quite curt and aloof at first.  With her bourgeois streak, one might find her haughty.  But it is something else entirely. A kind of withdrawnness, a difficulty to communicate.   Devos brings the audience brilliantly into her character, making her sympathetic despite her misbehaviour.

Guillaume, on the other hand. is going through a rough patch in his personal life.   He is breaking up with his wife and must sort out the issue of his daughter’s custody.  He wants to have the daughter half the time, but his lodgings do not permit it.  He needs to earn money to get a bigger place before the judge allows him custody.   Socially, it is quite the opposite from Anne. He feels comfortable in any kind of situation, no matter who he is talking to.  Even a little too comfortable.   Which is bound to arouse his client’s curiosity.  From Anne Walberg’s perspective, it almost makes Guillaume her bodyguard.   He does save her bag from being snatched only to be scolded for the deed.  “What if the snatcher carried a knife?”  She admonishes.  She has a good nose but he has flair.  She gets to use it, and sometimes to hide behind it. Guillaume lacks all the qualities required to be a professional chauffeur, but he is good at reading people. He lacks patience, deference.

The two characters play off each other beautifully.

Near the end of the film, she is visited by Professor Ballester in hospital.  Apparently, she had accidentally taken too heavy a dose of sleeping pills.  The chauffeur helped bring her to the hospital as well as contacting the professor.  It is here that the audience is introduced to the term ‘anosia’ a term I have never heard of before.  Anosia, Ballester explains., is the partial or complete loss of smell.  I looked it up on Wikipedia and the condition and word definition exists.  How little we (or I) know.  There is some truth in this fictional tale of LES PARFUMS.

There is a segment in the film where Anne is hired to smell out a cave in order to replicate it - odour-wise for the tourist industry of the region.  This concept is not so far-fetched as can be observed in Werner Herzog’s documentary CAVE OF FORGOTTEN DREAMS where the identical idea was introduced.

The film’s premise may seem superfluous.  But like the story’s two eccentric subjects, the film shares their charm.  Misfortune may turn to benefit and a simple film premise may similarly turn into an endearing and charming piece of entertainment.