TIFF Cinematheque Presents - The films of Johnnie To

Considered one of the greatest Hong Kong directors still working today, Johnnie To has amassed an impressive list of films that include many different genres. To is best known a an action director with films like PTU and THE HEROIC TRIO, both films spurning sequels.  His films have graced Cannes as well as the film festivals in Venice, Berlin and Toronto.

This is TIFF Cinematheque’s first retrospective of To which will include films that have influenced him. One is King Hu’s DRAGON INN one of the best sword sagas ever made.  The climatic battle at the end is unforgettable.  To will be present to introduce that film as well  as a few other screenings.  A real treat!

A total of 19 films are in the series.  A full review of OFFICE and capsule reviews of selected films are found lower down this article.

For complete listing, venue and ticket pricing, please check the TIFF website at:

The program runs from October 26th right through Christmas, a good well spread out of the 19 films. 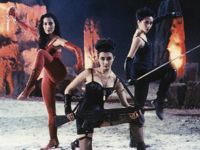 THE HEROIC TRIO stars three of the most famous stars in Hong Kong films of the 90’s - Michelle Yeoh, Anita Mui and Maggie Cheung.  They play action super heroes with super powers battling the ’evil one’ who has a scheme to rule the world forever with his emperor who is to be chosen for kidnapped babies.  Meanwhile, back on earth, the police led by Inspector Lau (Damian Lau) are baffled.  They are not the only ones, as the audience often feels the same way for the way the convoluted story unfolds.  Anything can happen in the film and does with no time boundaries.  There is old fashioned martial-arts combined with machine guns and motorbikes, computers mixed with swords and ancient artifacts.  But at least To’s film is full of energy and invention if one can put up with the nonsense.  The ending with the charred skeleton emerging from an explosion is an un-shamed copy from TERMINATOR 2, but who cares as long as the film is uninhibited fun not meant to be taken seriously.  And the three females stars are exciting to watch.

The ELECTION in this film refers to the election of the new head of the Triad gangsters in Hong Kong.  The two candidates are Big D (Tony Leung Ka-fai) and Lok (Simon Yam).  Lok is the more stable, even tempered and logicalmone while Big D is flashy, hot-tempered and unpredictable.  When Lok gets elected, Big D threatens to unstable by forming a new group.  The cops want no Wars while Lok agrees to some truce.  There is some fight over the baton, which symbolizes power.  There is more dialogue and story in ELECTION compared to the other To films, credit given to its scriptwriters Yau Nai-hoi and Yip Tin-shing, who seem to somehow know how the underworld operates.  The film premiered at Cannes before opening in Hong Kong and is one of the more successful of the To films spawning a sequel ELECTION 2.

The story of OFFICE follows the IPO (Initial Public Offering) of shares by a major  company, Jones & Sunn led by the Chairman (Chow Yun-Fat) and his CEO who also happens to be his mistress (Sylvia Chang).  The film opens as two new interns Lee Xiang (Ziyi Wang) and Kat-Ho (Yueting Lang) start new jobs but learn that there are lots of kissing asses and dirty business that need be done in order to be successful.  Lee Xiang is earnest and naive. Two other characters that play a part in the plot are high flyers Sophie (Wei Tang) and David (Eason Chan) who forge financial figures.  OFFICE is pleasant to the eyes - great set decoration and design.  Each office space is designed artistically and modern, often with crystalline and curved shapes.  Wardrobe, especially those worn by Sylvia Chang are haute couture.  The characters break into song at any time but the songs are often clumsily inserted, and break the flow of the narrative.   OFFICE barely succeeds as a musical and satire and runs a bit long at just under two hours.  The novelty of the sets and songs wears off quite soon.