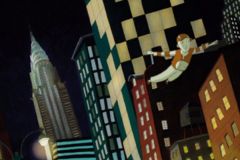 PHANTOM BOY is the next animated feature after the French directors Felicioli and Gagnol’s successful Oscar nominated A CAT IN PARIS.  While the latter film took a distinct Parisienne personality, the new film hopes to do the same with New York City where the story is set.

The film begins with a boy reading a story to his little sister.  It is revealed then that the boy has a sickness and has to go to hospital for extended periods of time.  The boy somehow (don’t ask!) attains supernatural powers of being able to leave his body.  He befriends a cop who is wheelchair bound.  The cop is in the process of saving NYC from a computer hacker that will hold the city ransom.  A girl (Audrey Tatou from AMELIE) helps destroy the virus and saves the city with the help of both he cop and the boy.

PHANTOM BOY as an animated feature looks like the older toons such as BETTY BOOP unlike the slicker animated features from Disney, Pixar or Dreamworks that North Americans are spoilt with.  Inevitable comparison will make PHANTOM BOY look inferior despite the directors attention to detail  The stars on the socks of a character can be seen just as clearly as any of the character movements.

The film is screened in French with English subtitles.  The  French is simple enough so that those learning the language can understand the dialogue without resorting to reading of the subtitles.  But as much as foreign films should not be dubbed and shown in their original languages, the characters in New York City speaking French look odd.  The film loses its credibility.

Despite the supernatural story, the story is quite plain and predictable.  A lot of rules are dictated into the story.  The boy, for example will die if he does not return to his body after  a certain amount of time.  How does he know and how did this rule come about?  Strange supernatural reasonings make little sense in the film.

There is nothing super exciting or super funny.  The main humour is derived from the black mayor who is always screaming at the cop for all the accidents caused while doing his duty.

The film is progressive in featuring a black NYC mayor.  The film is current with the fact that hacking a central computer can bring the entire modern city down as just last year the whole New York stock exchange was brought to a halt because of a virus.

I have not seen A CAT IN PARIS but assume that that film is better than PHANTOM BOY which might also be called A PHANTOM IN NEW YORK.  The film might have worked better if set again in Paris, France in the home country of the two directors.