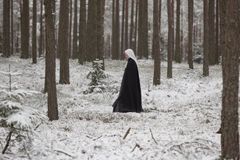 The nuns in a convent during World War II are THE INNOCENTS referred to in this film, based on a true story.

Anne Fontaine (her last film COCO AVANT CHANEL) is a director who has made her name in making films about women.  Her most notable film was DRY CLEANING, my favourite one of hers, in which she dished out a delicious dose of devilishness without being too serious.  THE INNOCENTS is her most serious film.

It is Warsaw in the December of 1945 when the second World War is finally over.  But the problems are not.  When the film opens, a young French female doctor, Mathilde (Lou De Laâge) is treating the last of the French survivors of the German camps.  When a panicked Benedictine nun appears at the clinic one night begging Mathilde to follow her back to the convent, what she finds there is shocking: a holy sister about to give birth and several more in advanced stages of pregnancy.   Russian soldiers have raped the nuns who are now facing both the shame of exposure and a crisis in their faith.  And they have deal with their pregnancies and their babies afterwards.  Being nuns, they are totally new to the concept of birth.  But worse of all, their strict Rev. Mother (Agata Kulesza) is not helping.

The film is beautifully shot by cinematographer Caroline Champetier.  The luscious white snow on the ground, the woods, the middle of winter contrasted are contrasted with the dark corridors of the convent.  The haunting music by Grégoire Hetzel is excellent and one wishes that the soundtrack be played a bit louder for it to be more appreciated.

But the narrative is not as strong as one might expect a story of this nature to be.  One reason is the lack of a clear point of view.  Though the majority of the film is told from Mathilde’s perspective, the film occasionally shifts to nun Maria’s and the Rev. Mother’s views.  But the script also fails to establish the strength of the nun’s faith.  The nuns and Rev. Mother appear not only helpless, but undetermined to have any self will to fight.   All they do is pray and say it is God’s Providence in the midst of all the troubles.  The fact that they are this helpless and unwilling to help themselves makes them more pitiless which undermines the power of the story.

The camaraderie between Mathilde and her co-worker, a French Jewish doctor (Vincent Macaigne) provides some needed distraction from the over-serious proceedings.  But Vincent claims (and he improbably correct) that he is too ‘ugly’ for  Mathilde.  His romantic advances are  not returned.

Fontaine’s film also ends up over sentimentalizing as in the births of the new born with too many shots of smiling nun faces.  The message of Fontaine’s film comes out muddled.  It is a pity as Fontaine has put in a lot of effort into this piece of work.