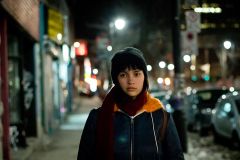 THE SAVER, a small budget little gem, based on the novel by Edeet Ravel opens in the small movie Carlton complex in Toronto, but it is a film that delivers big messages.  The film works because writer/director von Carolsfeld who directed MARION BRIDGE, loves her subject, the setting of Montreal and all her characters.  And it shows in her film.

The film’s protagonist is a teenager.  But this teen is not one who can enjoy parties, go to movies, drink and can have fun.

When the film begins, poor (literally poor) 16-year old native Fern (Imajyn Cardinal) loses her mother.  Not only is she poor, she is now an orphan and she is afraid of Social Services.  She runs away.  But Fern is a resourceful teenager.  After finding a book entitled “Fifty Ways to Become a Millionaire”, Fern takes the book to heart and decides to save (hence the film title THE SAVER) so she can get rich and live without having, in her own words, to take shit from anyone anymore.  But dreams do not always come true.  Not even in movies.  And the film, which is set in winter - with the scenes of Fern trudging through the snow - emphasizes her hardship.

Von Carolsfeld’s film is a realistic one.  She also allows her audience to think and to figure things out without spoon-feeding them.  One is the film setting.  It is not stated specifically that the city Fern lives in is in Montreal, as she and her mother speak English.  But the others and the street and shop signs are in French.  A boy that helps her is an ambiguous character.  He even offers Fern a gift with the sweet words: “I got something for you.  I thought you might like it.”  But a twist then shows him taking advantage of her.

Von Caroldfeld’s camera is often very close to the characters. In the first 20 minutes of the film for example, the camera is always next to Fern (showing her top half and head) pulling back to show the background only a few times.  One advantage of this tactic is the audience being forced to really connect and feel for Fern, something the Dardenne Brothers also used to do, with the camera at neck level in a similar film ROSETTA.

The cast of unknowns deliver exceptional performances, especially Cardinal as the lead.  Veteran Quebec actress Pascale Bussières lends her hand as a fussy tenant who ends up winning both Fern’s and the audience over.

But von Carolsfled’s film is sweet and winning because she infuses quite a number of really sweet scenes which do not seem intrusive.  When Fern’s mother passes away for example, a scene shows Fern pulling a white sheet over the mother’s body in the morgue.  When Fern misses a day of work, her boss (Mamidou Savadogo) asks: “Were you too busy with the colour scheme of your castle?”  It is thus appropriate that the film ends with another suitable sweet segment (that will not be revealed in the review.)

THE SAVER is the story of a nice girl making good under adverse circumstances.  The film shows a varied world  with good and bad people, in good an bad situations.  This is well-made little feel-good film that is surprisingly based on an unfortunate situation.