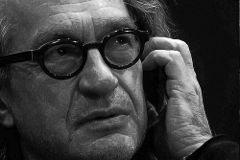 TIFF Cinematheque Presents - ON THE ROAD - The Films of Wim Wenders

The On the Road - the films of Wim Wenders” retrospective is devoted to German director Wim Wenders and features new digital restorations of his essential early works.

Born Ernst Wilhelm, Wim Wenders, alongside Fassbinder and Herzog, is a major German director of the ‘New’ German cinema.  Besides being a filmmaker, Wenders, still working at present in film is a playwright, author and photographer.  Wenders works with the medium of photography, emphasizing images of desolate landscapes which resulted in his second latest film THE SALT OF THE EARTH featuring Brazilian photographer Sebastião Salgado.

Wenders has gone on to win many awards including prizes at Cannes, Venice as well 3 Oscar nominations.  His most famous film is arguably WINGS OF DESIRE that won him Best Director at Cannes in 1987.

Wenders' films have encompassed different genres that include detective film noire, documentary and personal drama.  This is the chance for the public to appreciate a whole range of films by Wenders,

The series runs from Jan 28th to March 6th.  Films are screened at The TIFF Bell Lightbox.

Selected films are capsule reviewed below.  Films were provided courtesy of TIFF Cinematheque.  Dates of screenings of the selected films listed below the reviews. 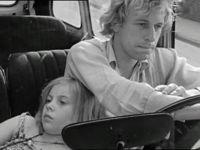 Considered one of the best but little seen Wenders film that almost never got made when the director found his film too similar to Peter Bogdanovic’s PAPER MOON.  ALICE  is the first part of Wenders' "Road Movie Trilogy" which included The Wrong Move (1975) and Kings of the Road (1976).  The film is shot in black and white by Robby Müller with several long scenes without dialogue, also used by other directors like Wes Anderson and Jim Jarmusch.  The story concerns a writer Philip Winter (Rüdiger Vogler) who has missed his publisher's deadline for writing an article about the United States.  He decides to return to Germany, and encounters a German woman, Lisa (Lisa Kreuzer), and her daughter, Alice (Yella Rottländer), who are both doing the same thing.   Lisa leaves Alice temporarily in Phil's care with Phil stuck with Alice, (like father and daunter in PAPER MOON) searching various cities of Germany for her grandmother.  But it is more the story of Phil, who needs to find himself and some meaning in life.  Phil does not feel his own existence and Alice is his saviour.  A seemingly simple film with deeper undertones and a profound message.

Wenders who has an obsession with Patricia Highsmith crime novels get his chance to film one of her stories.  Unfortunately, the film fails as a crime thriller and barely succeeds as film detective noir.  The plot concerns Tom Ripley (Dennis Hopper), who deals in forged art, suggesting a picture framer he knows who would make a good hit man for a mysterious Frenchman (Gerard Blain).  It is this farmer, Jonathan Zimmermann (Bruno Ganz) who is the film’s lead character.  Wenders treats him just as in his other films.  It is a character study of a lonely man, suffering from fear of his death from leukaemia, wanting to provide for his family.  So, he takes his job as a hit man.  Wenders does provide surprisingly suspenseful scenes, like the ones in the subway when Jonathan executes his first hit and the train sequence.  But there are too many loose ends in the story and the story lacks coherency.

The film that shows Americans more about Cuba than any other, while celebrating Cuban music at its best!  The BUENA VIISTA SOCIAL CLUB is an old meeting of band musicians and singers in a building that does not exist any longer.  The musicians used to meet weekly to perform band music while people listened and danced.  In this delightful tribute to these Cuban musicians, Ry Cooder assembled talents like Compay Segundo, Joachi Cooder, Omara Portoundo, Ruben Gonzale among others to perform together at NYC’s Carnegie Hall.  The result is a reunion of friends and music.  Just go with the flow, sit back and enjoy this free flowing tribute to times gone by and thankfully, not yet lost.  The documentary also won Wim Wenders (a  lover of music, as evident in all his film where music plays a large part) an Oscar nomination for Best Documentary.

Wender’s second feature is an assured piece that follows the lines of many of his similar films.  As in PARIS TEXAS, the opening line was “this river looks just like any other river.”  In GOALKEEPER’S ANXIETY, the lead character (Arthur Brauss) is again a brooding nobody that resembles the nobody in his other films.  This nobody is a hot tempered goalie who ends up killing a cinema ticket seller, Gloria (Erika Pluhar) he follows home.  There is no real reason for him to do so.  Based on the novel by Peter Handke, Wender’s often collaborator, the slow moving non-film is nevertheless a captivating one.  The acting is nothing short of absorbing and the audience is drawn into the boring yet absorbing world of the man who keeps having his way with women.  In his defence, he is quite a good looking fellow.  The atmosphere of the 70’s is certainly well presented, understandably as the film was made in 1971, but the music (mainly American rock and roll from the likes of Van Morrison, The Troggs, Roy Orbison) from jukeboxes and an eerie score helps.  Wenders was supposed to be unable to pay royalties for all the songs, so this restored version has had some of the songs replaced.  Still, this is a simple film, told by a Master who utilizes the medium to the maximum.

Wenders’ writing collaborator Peter Handke gets to direct his own film from his novel and script in THE LEFT HANDED WOMAN.  Wenders’ influence is clearly apparent from the camera shots particular the wide pa moving shots that Handke also uses.   The film follows the lonely and sad life of the woman in the tile, Marianne (Edith Clever) who dishes her husband to live alone with her son, for no apparent reason except to rediscover herself.  The film then plods on and on and on.  It is a slow film not helped by the fact that the reason is left for the audience to surmise and that Marianne is quite an annoying creature.  It is not surprising that her husband Bruno (Bruno Ganz) ends up slapping her around.  (I am saying this despite being opposed to female abuse.)  Her life and her husband’s lives are in tatters.  But consolation arrives later in the film with the visit of her father and Bruno's final acceptance of her absence.  The film is pensive, and pretty - the images being crisp and clear, but this is one slow film that is difficult to be absorbed into.  Maybe the film would have been different if directed by Wenders, who produced the film.

Touted as many’s favourite Wenders’ film, PARIS, TEXAS is a sprawling desert epic about a man discovering and re-discovering himself in a desert landscape.  This allows stunning cinematography by Robby Miller aided with music by Ry Cooder, the musician featured in Wenders’ BUENA VISTA SOCIAL CLUB.  Written by L.M. Kit Carson and playwright Sam Shepard, the story follows an amnesiac, Travis (Harry Dean Stanton) wandering and lost in the desert.  His long-suffering brother Walt (Dean Stockwell) finds and brings him home where it takes a while before he re-connects with his 7-year old son, Hunter (Hunter Carson) after his 3-year disappearance.   The two bond and take off to find the wife/mother (Nastassja Kinski) leaving Walt and his wife Anne (Aurore Clement) puzzled.  The film is as pensive as the best of Wenders’ films and Wenders allows his audience to go deep into the thoughts of his main character.  A bit puzzling is the casting of French actresses Clement and Kinski as the two wives, one of whom speaks with a strong French accent.  The film unanimously won the Palme d'Or (Golden Palm) at the 1984 Cannes Film Festival from the official jury, as well as the FIPRESCI Prize and the Prize of the Ecumenical Jury.(Screening: Feb 6)

A Master’s tribute to another Master.  The late Japanese director Yasujio Ozu’s work from the silent to present featured the city of Tokyo in all his films.  The film begins with the credits of Ozu’s TOKYO STORY.  Director Wenders travels to Tokyo in search of Ozu and to get a feel of the Master as well as his works.  The result is marvellous.  The audience, given a perspective of Ozu from Wender’s voiceover get to experience Tokyo as never before.  From golf, baseball, restaurants with artificial food (there is a section of how this is made) on display and arcade games, the film feels occasionally surreal.  The best parts of the film deal with his reminiscing of the Ozu films, especially in the one in which Ozu’s regular actor Chishu Ryu gets to have his say.   From the bird that flies across an image, to the shadow that a cloud casts to the gesture of a child, all those make up the wonder and power of an Ozu film - all of which are captured in this wonderfully inspiring Wenders  documentary.

WINGS OF DESIRE
(Review to be posted - Screening in March)