The Summer in Italy series begins June 27 and goes on to August.  A MUST for all cineastes as the series includes both hidden gems and restored versions of classic Italian films.  This series goes on simultaneously with the Vittorio Se Sica series of films, also featured in an article on this website.

(The is due to time restrictions of the reviewer in viewing all the films.)

The following, James Quandt’s (programmer’s essay) piece (IN ITALICS) is reproduced from tiff.net

which provides the perfect description of the SUMMER IN ITALY series.

TIFF Cinematheque marks a quarter-century with a stupendo season of Italian classics, which provides symmetry with the complete Pier Paolo Pasolini retrospective with which the Cinematheque launched in the summer of 1990. Several perennial favourites are included (it seems we can't let a year go by without showing Sandra), but several important films which have never graced our screen(s) also receive Cinematheque premieres — most notably the silent spectacular Cabiria, a font for much cinema that followed. The list of featured directors to whom we have dedicated retrospectives over the years is formidable — Antonioni, Germi, Rosi, Olmi, Visconti, Rossellini, Fellini, Petri, Bertolucci, and (this very season) De Sica — but the series also reminds us of those we have yet to do, particularly the great Alberto Lattuada. (Pasolini has reluctantly been excluded, strictly because we have presented not one but two complete retrospectives of his films in the last five years.)

Given the immense scope of this season's Italian programming, it's perhaps inevitable that motifs emerge: World War II and its aftermath; the moral turmoil resulting from the postwar economic boom; the traumas of childhood. Sometimes films line up in thematic pairs: compare, for instance, the intertwining of Nazism/Fascism, incest, and suppressed memory in Sandra and The Condemned of Altona; the Biblical compression of time and harsh portraits of Rome in Il Bidone and Bicycle Thieves; the double roles, one comic, one tragic, that Vittorio De Sica plays in Signor Max and General della Rovere; and the mirrored portraits of moral drifters in the Eternal City in La Dolce Vita and The Passionate Thief. The season is also rich with comedies — "white telephone" farces, classics of commedia all'italiana, and caustic satires of a resurgent postwar Italy reeling from the materialistic excesses of le boom — featuring the likes of Sophia Loren, Marcello Mastroianni, Totò, Vittorio Gassman, and Alberto Sordi. (It might be invidious to single out any one of these divine comedies, but miss Il Sorpasso at risk of cinephilic excommunication.)

Whether hilarity or severity is your pleasure, our summer season offers many sublime viaggi in Italia. Avanti!

For complete film listing, ticket pricing and venue of this series, please check the TIFF website at:

AMARCORD as well as 81/2 establishes the great late Italian director’s love for the seaside. The Oscar winner for Best Foreign Film in 1975, AMARCORD (I REMEMBER), set in the seaside village of Rimini during Mussolini’s reign is loosely based on his own childhood memories. The film follows the travails of the Biondi family, particularly the antics of the young son, Aurelio (Armando Brancia) who often gets into mischief from choking from the sweet seller’s (Maria Antonietta Beluzzi) naked breasts to peeing on a fellow cinema patron’s bowler hat. The film is sweet and funny despite its fart and rude jokes. The cinematography is nothing short of magnificent and the musical score by Nino Rota comprising of old tunes aids the nostalgic mood. A film that can be seen countless times (this is my 5th viewing) without losing it freshness and entertainment.

Early Fellini! If Fellini’s LA DOLCE VITA celebrates life in all its exuberance, his earlier film IL BIDONE is the complete antithesis.  The film follows the exploits of a group of swindlers, focusing on their aging leader Augusto (Broderick Crawford), as they go about their "business," reaping both rewards and consequences.   The film feels like short stories put together as the various scams are largely unconnected.  As soon as soon as Fellini allows he audience some sympathy for Augusto, he pulls the plug by showing the man’s other side - in which he revealed as a true swindler with no morals whosoever.  Fellini’s wife, Giuliette Masina has a supporting role as poor Iris while composer Nino Rota adds to the musical score.  Shown in a restored 35mm print.

Director Mario Monicelli’s very funny crime caper comedy that inspired Woody Allen’s SMALL TIME CROOKS features an all-star cast of at that time relative unknowns that includes Marcello Mastroianni, Claudia Cardinale, Renato Salvatroi, Vittorio Gassman and Toto as the safe expert.  It all begins when a petty car thief, Cosmo is arrested.  His girlfriend and former accomplices look for someone to take the rap.  They all form a gang instead, intent to break into the office of a pawnshop to crack the safe.  The gang of misfits, if not fighting among themselves are getting themselves into other trouble.  It does not help that the robbery info comes from Cosmo in jail, hearing it from a fellow inmate.  The film is very Italian, with the characters, all out of work lower class embracing the poverty, petty thefts and desperation of the times.  The humour is fast, furious and original and there is no shortage of laugh-out loud moments.  The film spawned two sequels and a French remake CRACKERS by Louis Malle.

FELLINI SARYRICON, set in 1st Century Rome and based on the written work of Petronius during the reign of Emperor Nero is more Fellini’s imagination than anything else. Fascinated by the gaps in Petronius’ lost work, Fellini conjures up an ancient adult piece that is more shocking than anything else. The film follows the adventures of Encolpio (Martin Potter) hunting and losing and finding the love of his life, a sweet boy who can deliver the sweetest of nights. Encolpio’s best friend Ascilto (Hiram Keller) has stolen Gitone (Max Born) from him. A wrestling match ensues and Encolpio learns that Gitone has been sold to actor Verbacchio (Fanfulla). A series of adventures occur which takes the audience trough the decadence, excesses and ugliness of the times. Though difficult to take in, in parts SATYRICON is nevertheless breathtaking, never boring and a feast (though not always nice) to the eyes. And SATYRICON is most homoerotic film I have ever seen even to this day!

Shot in black and white, THE FIANCES is neo-realistic romantic drama of a simple couple aiming for a better life. The trouble is that the idea of a better life is different for the man as it is for the woman. The man, a welder in Milan wants to make more money by taking a temporary job south while his fiance wants to be wed with him staying. He leaves anyway only to find the la dolce vita is not what he expected. Rents are high, there is nothing to do and he misses her. They communicate by writing and the occasional long-distance call. Olmi’s actors are imperfect creatures, not only in looks but in behaviour and aspirations. As such, there is a quality of charm they radiate, which helps the audience connect and feel for them. Olmi’s fondness of using flashbacks can be a bit confusing at times, for example in the case of whether the man has remained faithful to his fiance. Still, this is an impressive work of neo-realistic Italian cinema. 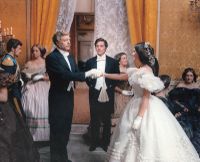 Luchino Visconti’s period drama based on the novel Il Gattopardo, is a handsomely mounted piece complete with gorgeous settings and music by Nino Rota.  The grand wedding ball at the end of the film is unforgettable and beautifully shot complete with dance, decor and gowns.  The film is odd with American Burt Lancaster playing the title role of Don Fabrizio, the Prince of Salina (his Italian dialogue dubbed in) and Alain Delon playing his handsome nephew.  Italians in the cast include Claudia Cardinale and Terence Hill.  Lancaster was chosen by the studio to provide star power for the expensive production.  The film was a hit in France, thanks patly to Delon.  The drama sees the change of times as the Lancaster character holds on to his power and wealth while playing politics cautiously.  The wealth of the Prince is on wide and shameless display while the poor suffer.  Visconti’s film is nevr dull and filled with subtle humour.  A great classic!

A comedy of social errors, MAFIOSO tells the tale of a super efficient and good natured factory Milan supervisor, Antonio (Alberto Sordi) who takes a long needed vacation with his wife and two daughters back to his native Sicily.  His boss at the factory insists he delivers a gift to Don Vincenzo (Ugo Attanasio), which he does successfully.  But things take a turn when he is obliged to do the Don a very odd favour.  He is put in a crate, flown to New York to assassinate an enemy.  The comedy takes the form of his love for Sicily, his Sicilian family, the land as well as his beautiful city wife who takes a while to finally adapt to the village life.  It is a beautifully top tale full of humour, insight as well as horror.  But thank God, everything turns out well at the end and all have become more experienced as well as the audience.

Antonioni’s very depressing film about a desolate character in a desolated landscape.  Guiliana (Monica Vitti) is the mentally disturbed (after an accident) wife of plant manager, Ugo (Carlo Chionetti), responsible for the pollution of Ravenna with its toxic waste destroying the sea and surroundings.  The place is cold, grey with fog blocking out the sun.  The film has toxic yellow smoke front he factories bellowing into the sky throughout its length.  Guiliana meets an engineer, Zeller (Richard Harris) who makes sexual advances towards her.  All the goings-on are weird especially the one segment involving Guiliana, her husband and friends playing sexual games in an abandoned shack.  Guiliana has a boy, who fakes having polio in another weird sequence.  The film has been praised for the director’s outlook on lifestyle and the environment.  But Carlo Di Palma’s cinematography of toxic waste is definitely stunning on camera.

Rossellini’s ROME - OPEN CITY follows Italian resistance fighters and workers as they struggle through hardship and tyranny to etch out a barely decent daily living with their families while just putting enough food on the table. If not fighting the enemy, the Italians are humorously screaming among themselves. The film centres on expecting Pina (Anna Magnani), a widow with son, Marcello about to be married again. Rossellini captures the essence of war in the details and warmth of the characters. A fly can be seen on the priest’s cloak while dust is plentiful after the bombings. The priest is seen playing football with the school children, then passing messages to the underground and also giving confession to those requiring forgiveness. A very moving film made even more riveting with the famous segment of the pregnant Anna Magnani shot by the Germans as she runs from the three-tonner. This is a must-see, one of the best war films made during war time.

IL SORPASSO (THE EASY LIFE) directed by Dino Risi (VIVA ITALIA!, MARCH ON ROME) and co-written by him, Ettore Scola and Ruggero Maccari is a free flowing Italian road movie. On a summer's day in Rome, Roberto Mariani (Jean-Louis Trintignant), a withdrawn quiet law scholar, encounters Bruno Cortona (Vittorio Gassman), a middle-aged boisterous man driving a stylish convertible sports car. Roberto tags along with Bruno and one thing leads to another with the two ending up spending two full days and nights with each other. Through many comic encounters that include meeting Bruno’s daughter, Lilli (Catherine Spaak) and revisiting Roberto’s old farmhouse, Roberto learns how to enjoy the carefree life for a change. And Bruno finally grows up at the end of the film. Though the Bruno character is really annoying, and a road hog at heart, the film slags whenever Gassman is not on screen.