The Festival will open with Shane Belcourt’s Red Rover, starring Kristian Bruun and Cara Gee following a lonely geologist qualifying for a one-way mission to Mars with the help of an offbeat musician, and will close with Jaren Hayman’s documentary This is North Preston about the economic and racial struggles in the largest black community in the country. Continuing the Festival’s commitment to support Canadian independent films, this year the CFF

introduces a second Homegrown Shorts programme. Nine features and 28 shorts will screen over the five-day event including six World Premieres, ranging in stories from deep exploration to historical satire, intense thrillers to warm romances. The 13th edition of CFF will take place March 19-23 at Cineplex’s Scotiabank Theatre in Toronto. Tickets can be purchased at canfilmfest.ca.

Carmody to our first Producing Masterclass, inspiring and supporting a network

documentaries Alone Across the Atlantic about Canada’s greatest living

and Wolves Unleashed: Against All Odds about world renowned animal

China for the film Wolf Totem; as well as the World Premieres of Gord Rand’s

and guilt during a school lockdown; Juan Riedinger’s A Snake Marked about a

visits; and Shane Day’s directorial debut The Desolation Prize, a throwback to

the 60s style hammer horrors, but with a modern edge. The Festival is pleased to

screen seven shorts that will have their World Premieres including Chala

including the first ever Producers Masterclass with legendary producer Don

transitioning from the big screen to the small screen; and a panel with film festival

programmers on how they programme their events. Visit canfilmfest.ca for details

on the Industry programme in the coming days. 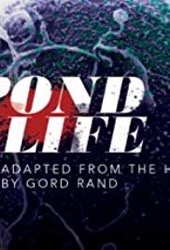 POND LIFE settles on a couple at home - a seemingly happily married couple, Dick (Ryan Blakely) and Sandy (Jeanie Calleja), high school sweethearts.  The relationship is about to be tested.  As Dick makes sexual advances towards his wife (showing a still healthy marriage), Sandy reveals that her sister or foster sister as Dick corrects his wife, Daisy (Kerry McPherson) and boyfriend, Richard (Ryan McVittie) are on their way to visit.  Two couples.  Two secrets.  And a night to celebrate a pregnancy goes haywire. As the film progresses, more plot points are revealed.  It seems that Richard and Dick have known each other quite well and in fact have some shady business going, despite many disagreements.  The story grows more sinister.  POND LIFE turns up a an entertaining quirky tale about couples, the type Canadian films are well-known for.

Shane Belcourt performs triple duty as director, co-writer and director of photography about an odd ball geologist (Kristian Bruun) and his relationship with a pretty musician (Cara Gee).  Damon, the geologist spends his waking hours searching for that elusive something. Whether it is for deeper meaning, love, or just “treasure” on the beach with his metal detector, it is to no avail.  So when Damon meets an offbeat musician named Phoebe handing out flyers for a one way trip to Mars, a bond quickly forms.  She’s going to help him find that thing he is looking for by sending him 33.9 million miles away, even though what he needs might be right in front of him.  The film hints at a love relationship rather than a plutonic one, and one can hardly tell where everything is heading even half way through the movie.  But the waywardness of the two individuals are nothing out of the ordinary and their gatherings grow tiresome quite soon.  Bruun and Gee carry the film for all that is worth.  The film is shot in Toronto with may familiar sights that should please audiences watching the film at the Canadian Film Fest for which this film has been chosen as the Opening Film.