Directed by Agnes Varda and JR 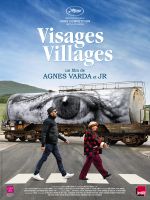 Faces Places have received high critical praise from critics at Cannes, many calling it a masterpiece.  That might be too big a term to use for this little personal film but VISAGES VILLAGES is simply the most delightful and personal film that premiered at this year's Toronto International Film Festival.  Director Agnes Varda (wife of the late Jacques Demy), now 89 is famous for her films, photographs, and art installations that focus on documentary realism, feminist issues, and social commentary with a distinct experimental style.  In this latest and perhaps her last doc (she is losing her vision), she and fellow friend and artist known as JR travel around France, particularly the North in their photo camion to take pictures of the people they visit.  At Le Havre, for example they photograph the images of three wives of the dockworkers and paste them on stacked containers.  In a deserted mining town, they paste the photograph of the last woman (wife of a miner) still staying in the old house district.  When asked the reason she does this, she replies it is too demonstrate the power of imagination.  No doubt about that, this film is personal, inspiring, powerful, sad and happy and handsdown, the best and most enjoyable documentary to be seen this year.