TIFF Cinematheque presents the first retrospective of films directed by or/an starring Ida Lupino.   Lupino was born in London and left eventually for Hollywood.  She was sometimes known as the British Jean Harlow.  But she called herself the poor Bette Davis for accepting roles that Davis would have otherwise rejected and later when she became a director calling herself the poor Donald Siegel.

She passed on at the age of 77 on the 3rd August 1995,   She was the only woman working within the 1950s Hollywood studio system.  With her independent production company, she co-wrote and co-produced several of her own social-message films, and was the first woman to direct a film noir, The Hitch-Hiker, in 1953.  Sh was married to producer Collier Young and together formed their own filmmaking company.  When she was suspended from Warner Bros., she became bored and learnt the filmmaking process of editing and tried directing after.

In her 48-year career, she made acting appearances in 59 films and directed eight others, mostly in the United States, where she became a citizen in 1948.

The retrospective runs from August 4th to Sept 2nd, 2017.

For the complete Lupino program, please click on the link below:

Below is the full review for OUTRAGE and capsule reviews for selected Lupino films:

Though dated as the film may seem, OUTRAGE was controversial at the time of release being only the second film dealing with the subject of rape - though the word was never used and the rape implied and never spoken of in detail.  The first film was JOHNNY BELINDA that earned Jane Wyman the Best Actress Oscar.

OUTRAGE  deals with a single young lady, Ann (Mala Powers) about to be married.  But when she is raped one night by a man with a scar on his neck, Anne leaves home, totally traumatized and unable to function properly in a social setting.  She meets a sympathetic Rev. Bruce Ferguson (Tod Andrews) who helps her recover.  At a party, she almost kills a man who make advances towards her, she imagining him to be her attacker.

Lupino’s film clearly has a strong feminine presence as observed in many scenes, the story and characters.  Ann’s office is made up of a larger female than male staff.  The males often perform more tedious tasks compared to the females, perhaps Lupino’s preferred take on an alternative universe.  For example, Ann’s male colleague neighbour is given the arduous monotonous job of stamping a pile of pages, one after another non-stop.  Ann’s father is a Geometry teacher, bogged down by a boring teaching job teaching what is widely well known as a boring subject - Mathematics, and down to an even more boring branch of it, Geometry.  Ann’s mother is the more sympathetic one and shown to be the stronger of the two parents n terms of making in impact on Ann’s happiness.

Lupino, who co-wrote the script with two other writers is a simple enough story that traces the traumatic effects of a night assault on an innocent young woman, how her life is affected by it, and how she slowly but finally recovers with the help of kind human beings.  No mention of the details of the assault are given, the nastiness just put aside, leaving the audience to imagine the worst, as observed by Ann’s after-attack behaviour.

Lupino builds up suspense and audience anticipation whenever she can.  The scar of the coffee seller is shown on camera close-up early in the film, implying the man to be of questionable character.  He is later revealed to be Ann’s attacker.  Ann agrees to work late one night, which prompts the audience to fear for her.

Ann’s after assault behaviour is drastically different undergoing changes such as visions of her attacker, denial of her engagement and paranoia that everyone around her is looking at her and judging her.  This is drastic behavioural change that almost results in Ann killing a man at a party who has made advances towards her.  Lupino shows the aftermath of a sexual assault in all its fury and unpleasantness.

OUTRAGE ends with the attacker getting caught as informed casually to Anne, though nothing is shown of the incident.

OUTRAGE is an ok film, solid for its time, but a bit dated considering how films have progressed since with censorship now relaxed.

OUTRAGE will be screened on August 24th at the Bell Lightbox in its 35mm archive print as part of the TIFF Cinematheque Retrospective on Ida Lupino entitled INDEPENDENT WOMEN that runs from August 4, 2017.  Watch for the Lupino article that will include capsule reviews of selected films from this retrospective. 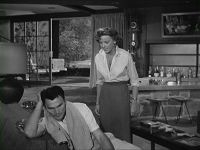 THE BIG KNIFE, based on the play by Clifford Odets, is so terribly crass that it turns into an absorbing watch from start to end.  It unrealistically over dramatizes the Hollywood Studio system though one must admit that some of it must be true.  It stars two of the most over acting players Jack Palance and Rod Steiger as studio star Charlie Castle and studio boss Stanley Hoffman respectively. Each have their monologues which each actor deliver in their expected over done capacity.  Ida Lupino plays Castle’s long-suffering wife, Marion who almost saves the movie.  She is given the last scene in which she groans to the camera as it pulls out from her closeup just as director Aldrich did with Beryl Reid in THE KILLING OF SISTER GEORGE.  Aldrich’s best movies have been camp women films like WHATEVER HAPPENED TO BABY JANE?, THE KILLING OF SISTER GEORGE and ALL THE MARBLES.  THE BIG KNIFE takes its material too seriously.

THE BIGAMIST not only marks Lupino’s debut as a director but the first film in which a female director has directed herself.  And it is not a bad movie at that.  The film tells the story of a bigamist, Harry (Edmond O’Brien) as he is discovered of having two wives.  Harry and Eve Graham (Joan Fontaine) want to adopt a child, as Eve is infertile.  Adoption agent Mr. Jordan (Edmund Gwenn) warns the couple that he would need to investigate them thoroughly.  Harry looks curiously at Jordan, something that worries Jordan.  The first third of the film is the most interesting as the audience sees Mr. Jordan discover, Harrys other wife in L.A., played by Lupino.  The flashbacks showing how Harry met his second wife and the events that follows are more melodramatic.  Lupino surprisingly sympathizes with the man, treating the crime of bigamy as one that can be forgiven.  She also surprisingly eludes the emotions of the two wives towards each other.  It is also interesting to note that the film’s writer and producer, Collier Young was at the time of the film, married to Fontaine and previously married to Lupino.

HIGH SIERRA is the name of the highest mountain range in California, which is also the place where the film’s climax is set. Ida Lupino plays a tough broad here, Marie who falls in love with an ex-bank robber, Roy Earle (Humphrey Bogart) on the run after he completion of a last heist at a resort hotel in the fictional resort town of Tropico Springs, California.  Marie faces romantic competition from innocent looking Velma (Joan Leslie) who Roy Earle initially falls for.  The pairing of Bogart and Lipno is nothing short of perfect, he being the tough guy and she his girl.  The heist segment and climatic shootout are both executed with expert precision generating suspense and thrills.  One can tell that this is a doomed romance from the start and one feels for poor Marie. Still an excellent film noir by all standards and yet another example of Lupino as an exciting screen presence.  An exciting film brimming with emotions!