TIFF Cinematheque Presents - I for Iran 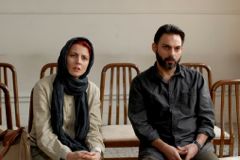 TIFF CINEMATHEQUE PRESENTS - I FOR IRAN

For the first time, TIFF Cinematheque presents a retrospective of seldom seen classic Iranian films. In the program entitled I for Iran: A History of Iranian Cinema, 14 top Iranian filmmakers select essential films that comprise the country’s capsule history of its distinguished national cinema.

Many of the films might not be well known to North Americans but the Iranian cineastes that I have met are familiar with these national classics.

Iranian cinema started attracting world attention from the 70’s as filmmakers Abbas Kiarostami, Mohsen Makhmalbaf, and Jafar Panahi gained international attention. A few years back, for the first time, an Iranian film took the Best Foreign Language Film Oscar. Asghar Farhadi’s esteemed A SEPARATION will be screened in the series.

For the complete program and description of films, please check the TIFF website at:

by clicking on the above link.

Below are capsule reviews of selected films, screeners kindly provided by TIFF Cinematheque.

THE COW is a critically acclaimed film with the simple story of an old villager, Hassan deeply in love with his pregnant cow. While he is away in the capital, the cow dies. The villagers are afraid of his possible reaction and keep the news from him when he returns. But Mehrjui’s film is more profound than it appears. It covers mental illness and how the simple villagers deal with it. When the film begins, the village madman is tied up and ridiculed by the children until the elders put a stop to the abuse. When Hassan realizes that his cow is gone, he himself descends into madness, believing that he has become the cow, eating hay and sleeping in the cowshed. The villagers are more sympathetic to his madness, trying to console him and taking him to hospital. But their patience is tested and one starts flogging him as if he was a cow. The lives of the simple village folk, their chores, fears and behaviour are also on display in the film. It is a world seldom seen but nevertheless quite fascinating. Mehrjui’s film is a brilliantly told simple tale easy to watch and totally enthralling. The film won Best Feature in 1971 at both the Berlin and Chicago Film Festivals.

Considered one of the best Iranian films ever made, this seemingly simple feature is a romantic comedy that reflects Iranian mores in Iranian slum between a teacher and his first love.

A well educated and humble teacher arrives in a new city and at a new job in the pre-revolutionary Iran. He falls in love with a hardworking underprivileged young woman that nurses her very old mother and raises her young brother.  The obstacles? She is promised to a thug, she is his first love, the whole city knows about the two and teases them incessantly and both he and she are too shy to reveal they feelings. first time director Beyzaie lays on display

in environment where commitments and social problems often stand in the way between people and their dreams. The teacher is bit of a goof, looking too quite a bit like Woody Allen with his glasses. The girl, on the other hand, is torn between duty and romance. The children are nothing short of adorable as is this delightful film.

This comedy of errors, based loosely on a modern day adaptation of 10001 Nights, follows the happenings around the death of a hunchbacked theatre actor after he suddenly dies from a heart attack. His theatre troupe dumps his body after failing to properly dispose it, resulting in comedic setups, some of which are quite slapstick. The funniest bit invokes thugs chasing after vital information scrubbed on a piece of paper that the hunchback has kept in his belt. The film also reflects differences between the poor and rich in society, traditional and modern conventions but mostly hinting that there is an affinity for humans to do bad no matter where they come from. An easy piece of entertainment, that is undemanding and quite enjoyable.

This 25 minute film is part of the program called ‘The Image Remains’, consisting of Iranian Short Films introduced by Roya Akbari. The film begins similar to THE COW in which the young kids of a village are taunting an old man, that he is crazy. But he is not, he angrily cries out. He later gains their trust and teaches them the alphabet, hence the film’s title. When he comes to the letter ‘p’, a boy tells him of a pelican which he has never seen The rest of the film has him travel to a nearby park in search of this mysterious creature. An ok short, that depicts the states of loneliness and wonder.

A SEPARATION is a drama about a husband and wife separation but it plays more like a thriller whodunit. The film begins with a close up of a couple arguing their case for divorce in front of a tired judge who has more urgent matters on his mind. Simin (Lelila Hatami, looking so much like Ingrid Bergman) wants to emigrate but husband Nader (Peyman Moaadi) refuses as he has his filial duty to care for his father suffering from Alzheimer’s. They separate and Nader hires a maid (Sareh Bayat), recommended by Simin to look after his father. Their daughter in the meantime does everything to try to bring her parents together. The story contains many layers which captures the interest of the audience. And there is a more! The maid ties up the father to run an errand. Nader returns to find the father has fallen, and when the maid returns he fires her and pushes her out of the house. Nader gets served with the crime of pushing her down the stairs causing a miscarriage. The maid’s crazy husband demands revenge and compensation. A SEPARATION is not a film about bad people but about unfortunate circumstances that occur in real life. The father’s Alzheimer’s, the miscarriage, a couple’s quarrel, loss of a job are uncontrollable incidents. The characters cope with these events the best they can, and sometimes they get out of control. But director Farad also infuses the good in his characters. Though Nader is in disagreement with his wife and angry at the maid, there is controlled anger. He does not beat up either woman. He also pleads with the judge not to arrest the maid’s husband out of his good heart despite the harm he could do to his family. The film also brilliantly ties in Iranian culture, religion and social mores into the story. The film succeeds in looking at different points of view like Nader’s, the maid’s Simon’s the daughter’s without losing the strong narrative. The result is an extremely compelling and satisfying and moving film that won the Oscar for Best Foreign Language Film.

As the title implies, STILL LIFE is a slow film. The first part of the film illustrates an elderly railroad crossing worker and his family. His work consists of bringing down the barrier when a train comes by, while selling rugs weaved manually by his equally elderly wife. They live in a a one room small building, which is assumed to be provided by the railroad company. The film shows them eating, communicating, sleeping and doing their daily routines.  As the film reaches its middle section, they are visited by their son, in the military, who arrive for a short while, tired. The family interaction reveals much of the Iranian culture and mores. It is towards the last of the movie that director Saless turns the film into a little suspense drama. The worker is served a notice of retirement. While he and his wife try to ignore it, they have do do something when the replacement worker arrives at the building. STILL LIFE is marvellous piece of filmmaking. The audience learns and grows to love this foreign family, and likely be seating at he edge of the seats by the end of the film wondering what would append to the railroad worker and his wife.

Director Amir Naderi’s minimalist tale of the survival of a boy in search of his family is just as the film’s title implies. It is all about water, wind and dust. Sent to work in another town to provide money for the family, the boy returns home after the local lake has dried up only to find the place deserted and his family gone. He leaves the baby goat he brought back with a stranger while he makes a desperate search for his family. Water is of the essence. He witnesses dead animals (director Naderi provides lots in the landscape) while he helps those he encounters in dire need, including a crying child. Most of the scenes involve blowing dust with a few disturbing ones on survival - the worst one being wild dogs ripping off meat from a cattle carcass. This is not a fairy tale with a happy ending but one of drastic survival. Well-shot, but be prepared to be shocked!